After two years as the caretaker of the Timber Creek Police Museum, Barry is back on the road to explore the rest of Australia. We caught up with him to celebrate his contribution to Timber Creek and the Victoria Daly Regional Council. 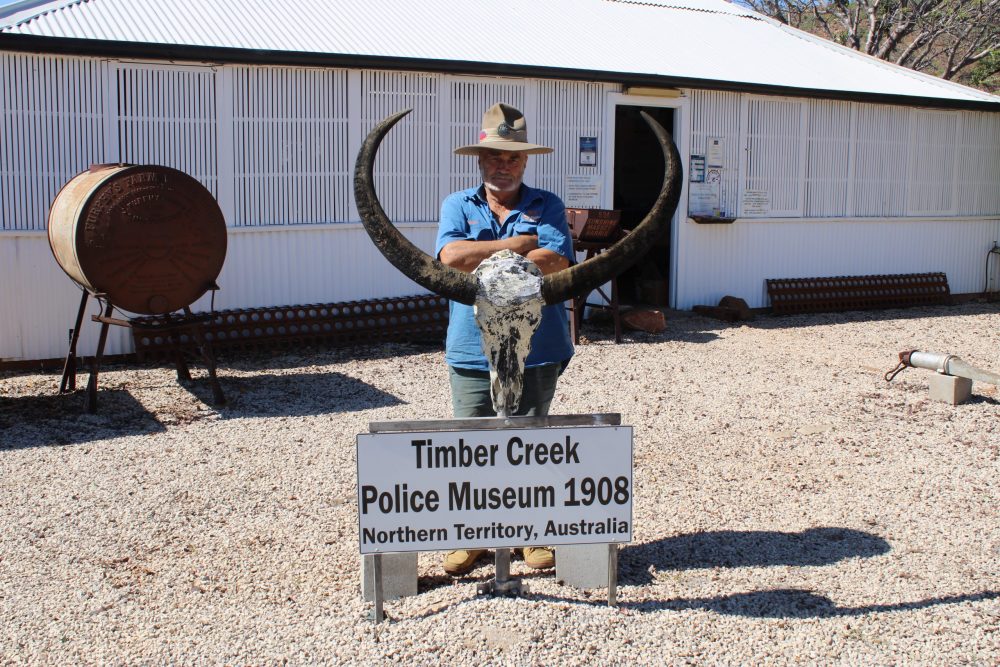 Bazza at the museum

Like many who end up in the Territory, when Barry packed up his life in Melbourne 30 years ago, he was on the hunt for an adventure.

Armed with only a loose travel plan, he worked everywhere from cattle stations, pubs, and schools, to being part of the film crew for former NT Administrator Ted Egan’s film, The Drover’s Boy.

Two years ago, he ended up in Timber Creek, taking on the job of fixing up and looking after the Timber Creek Police Museum. First built in 1908 as the Timber Creek police station, the museum showcases historical artefacts, photographs and books that illustrate the rich, complicated and bloody history of the area.

During Barry’s time in the role, he’s met and entertained many local and international travellers, impressing them with his knowledge of the area, and even learning a thing or two from the people he’s met over the years.

As he gets ready to move onto his next adventure, VDRC caught up with him to have a yarn about how he ended up in Timber Creek, what he’s loved about the job, and what he hopes the future of the museum holds.

How did you end up in Timber Creek?

In 1983, I sold my business in Melbourne, packed up my life and went travelling. I remember first coming to the Timber Creek area back in the 80’s, and it really was the final frontier. I loved the rough life, and we didn’t have to answer to many people back then.

I worked on cattle stations in Victoria River Downs and Mataranka, assisted on Ted Egan’s film, The Drover’s Boy, was a maintenance worker at Pine Creek Primary School, and looked after the Pine Creek Museum for a number of years.

After a bit of travelling overseas, I had come back to the Timber Creek area, and a job as the caretaker of the Police Museum came up. I was heading towards Western Australia anyway, so I thought why not stop for a bit. I was given a place to park my caravan for free, and it was a chance to learn about the area a bit more and talk to new and interesting people all day. What do you love about the job?

I love being able to talk to interesting people all day. I learn so much by chatting to people who come through here, about their lives, their experiences, their perspectives on the world. I think that is an important aspect of the job, is that you need to be well travelled within Australia, and to an extent the world. Or at the very least, have a curiosity to learn about other places and people around the world and across Australia.

What are some of the important facts and history of the area that you like sharing with people?

The thing about this is that the history of Timber Creek and the police museum is that it’s not all positive. They first started building the police station (now the museum) in 1906 and finished it in 1936. During that time, they had a tree out the back of the station where they’d tie up Aboriginal prisoners and leave them. You’ve also got the massacres, and violence between the local Indigenous groups and early settlers.

The North Australia Observation Unit, or the “Nackeroos” as they were often called, were also a large part of the area’s history. They were tasked with patrolling northern Australia to look for signs of enemy activity, operating in small groups on horseback. What do you hope for the future of the museum?

I hope that it continues as it is. I really hope the next person or people that take over has the knowledge and the enthusiasm to keep the museum alive. While there are great benefits to taking on the job, such as free rent, a working kitchen, and two water tanks, it shouldn’t just be about that. They really should want to give back to the community by running this place well.

What you want, is for people to walk out of the museum and tell others about how great it was and why they should go.

Are you the next Bazza? Victoria Daly Regional Council is on the lookout for a new full-time caretaker of the Timber Creek Police Museum, based onsite in Timber Creek.