International DJ, Charly Templar, is on a mission to bring DJ’ing to as many remote communities as he can, and thanks to a grant success, kids across the Victoria Daly region are getting behind the DJ decks too. 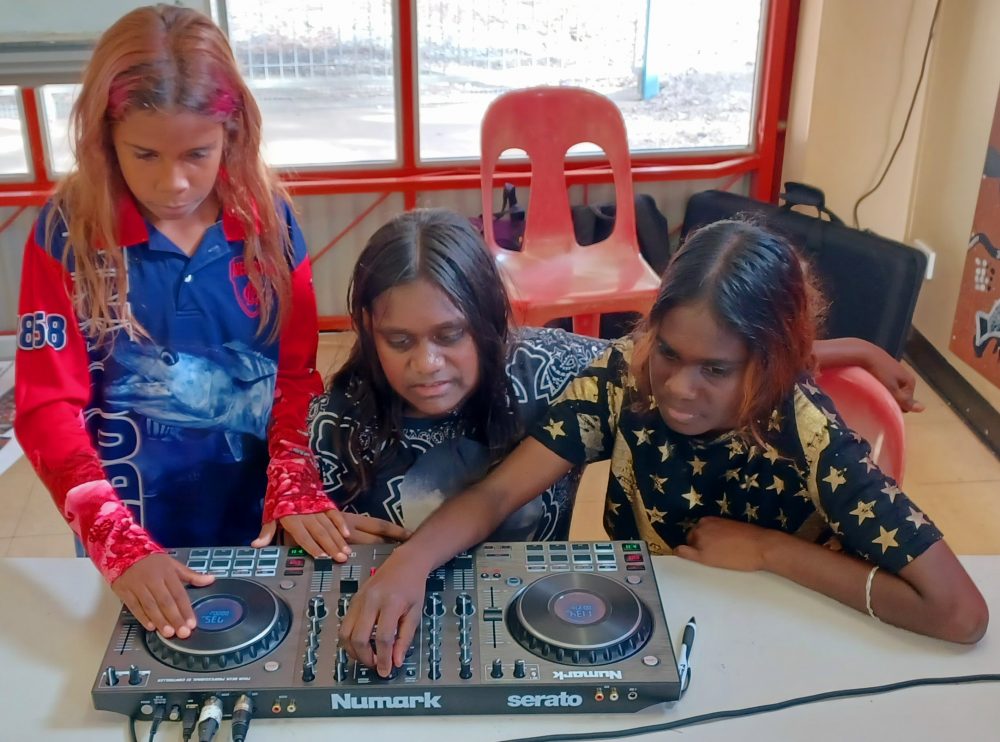 Young ones from Pine Creek and Kybrook Farms learning to DJ

Templar’s organisation, DREAM IMPACT INSPIRE, runs music and sport workshops right across the Territory with the aim of providing career pathways in music and producing, as well as an opportunity to engage in fun, safe and positive recreation activities.

Over the past few months, the charity has made its way to Pine Creek to run these workshops, with great success.

Following two workshops throughout 2021, VDRC successfully applied for grant funding from Territory Families to bring the organisation back to host a Christmas disco for the youth of Pine Creek and Kybrook Farm.

Young people who attended the workshops were tasked with planning, preparing, and then running the disco themselves, in the process learning how to assemble and use DJ gear, selecting songs to play, adjusting the speed of the song, and pressing play and pause.

Workshops continue and offer more in 2023

In January, DJ Charly Templar returned to Pine Creek, hosting a two-day DJ and boxing workshop, with a disco and BBQ held on the second night.

Financial support was provided by the Primary Health Network Australia, and use of VDRC’s Multi-Recreation-Complex was provided in-kind by Council over the two days.

Templar said that engaging kids in music and sport were some of the simplest ways to promote self-learning and boost confidence.

“It was an excellent event. Young people played musical chair games, they MC’d on the microphone to give instructions during the games, gifts were given to the winners, and no incidents were recorded,” Templar said.

“It was a fantastic experience for everyone involved during the two days.”

VDRC Mayor, B. Pedwell, thanked Templar for his continued work in the region.

“Kids in remote communities often miss out on opportunities to participate in recreational activities like this, which is why organisations such as DREAM IMPACT INSPIRE are so important,” Mayor Pedwell said.

“We look forward to working with DJ Charly well into the future.”