The Northern Territory Government must re-evaluate the emergency evacuation plan for the Timber Creek region to better deal with flooding and other natural disasters, the Mayor of VDRC says, as the community begins recovery. 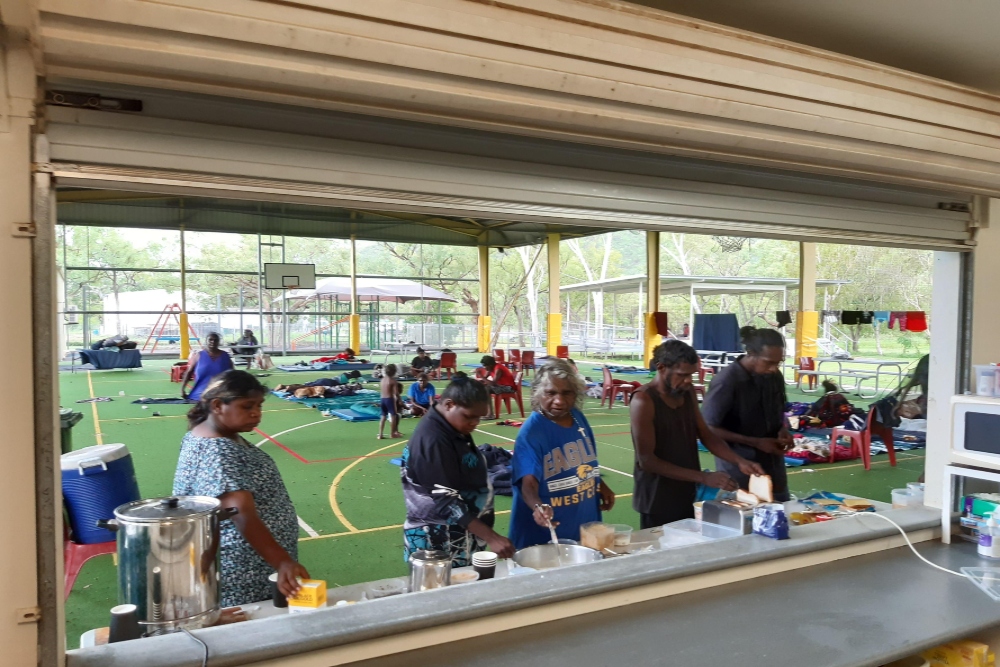 Following the one in a 50-year rain event, which hit Timber Creek and the homeland communities of Myatt, Gilwi, One Mile, Muruning, and Gulardi on 23 December, residents are now slowly returning home to rebuild.

It is estimated 140 residents were displaced during the disaster, evacuated first to the Council-owned basketball court in Timber Creek, then to the contractor’s quarters at the Bradshaw Defence Base.

Council was advised that there was only room at the contractor’s quarters for 52 people. It is understood that more could have been accommodated at the Bradshaw Defence Base.

A number of residents also travelled to Darwin and Katherine to escape the disaster.

Council would like to thank the VDRC Timber Creek staff who have worked tirelessly over the past few weeks to ensure the safety and wellbeing of evacuated residents and the rest of the community.

It would also like to thank the Northern Land Council for their support during this time and their massive effort coordinating public donations to affected community members; the Department of Chief Minister and Cabinet; the NTG Local Recovery department, headed up by Jake Quinlivan; and members of the Red Cross team based in Timber Creek helping with flood recovery.

Lastly, Council would like to thank the generous people of Katherine and Darwin, who have donated essential items such washing machines, fridges, mattresses, bed frames and smaller personal items that have been lost in the disaster.

Emergency evacuation plan must be reviewed

While the support provided by the Northern Territory and Commonwealth Governments has been an enormous help to the rebuilding of the region, there are lessons to be learnt from this event.

“The council building (previously Timber Creek town hall) is currently the nominated evacuation centre and can accommodate up to 220 people with current facilities. Presently only a few houses and some businesses in lowing lying areas are prone to flooding and residents are evacuated as required.”

Mayor Pedwell said however that the outdoor basketball court was not an appropriate official emergency evacuation location.

“Our basketball shed, while fine for community events and sporting games, is not suitable place to keep people safe and well during a disaster event,” Mayor Pedwell said.

“What’s more, if the flooding had been any worse, we wouldn’t have even been able to use the basketball court because it would’ve been underwater. We really need a centre that is large enough, safe enough, and has the facilities necessary to look after our community members during an awful time.”

He added that the plan is very Timber Creek focused, and largely ignores the needs of surrounding homeland communities.

“These communities and their residents are incredibly vulnerable and as we saw, were the worst impacted by flooding,” he said.

“Many were left without water and power, and it was over a week later that those issues were fixed. This plan must account for them and their needs during disaster events for the future.”

The recently announced financial disaster assistance fund, supporting relief efforts in the Timber Creek region, has been welcomed by Council.

Jointly funded under the Commonwealth-State Disaster Recovery Funding Arrangements, the funding will:

Mayor Pedwell said that while the funding is already proving a massive help in the recovery efforts, the rollout of the payments wasn’t exactly smooth.

“There was no information provided about what items could be purchased with the disaster payments, which has left community members confused and disappointed,” he said.

“And in one instance, a resident received three different cards for one $9,000 payment, that’s a huge hassle for them to manage these different cards while they are trying to put their life back together.”

He added it was disappointing the only way to check the balance of these cards was via a website many community members did not know how to access, or via ATM which charged a fee for use.

The payments are also only valid for 30 days, a short amount of time when taking into consideration the delays and difficulties getting goods delivered to such remote locations.

“While we are incredibly grateful for the support, there are improvements to be made. We look forward to future discussions with the Northern Territory Government as to how these improvements can be implemented,” Mayor Pedwell said.